In addition to the launch date announcement, ispace unveiled 10 mission milestones, the landing site for its M1 mission, its seventh payload and the HAKUTO-R countdown clock at the press conference held outside of the company’s mission control center.

*The above dates and times are subject to change depending on weather and other conditions.

“Our first mission will lay the groundwork for unleashing the moon’s potential and transforming it into a robust and vibrant economic system,” said Takeshi Hakamada, Founder and CEO of ispace. “We look forward to contributing to NASA’s Artemis program as a commercial lunar transportation service and pioneering the development of future industries and connecting the Earth to the Moon and beyond.” 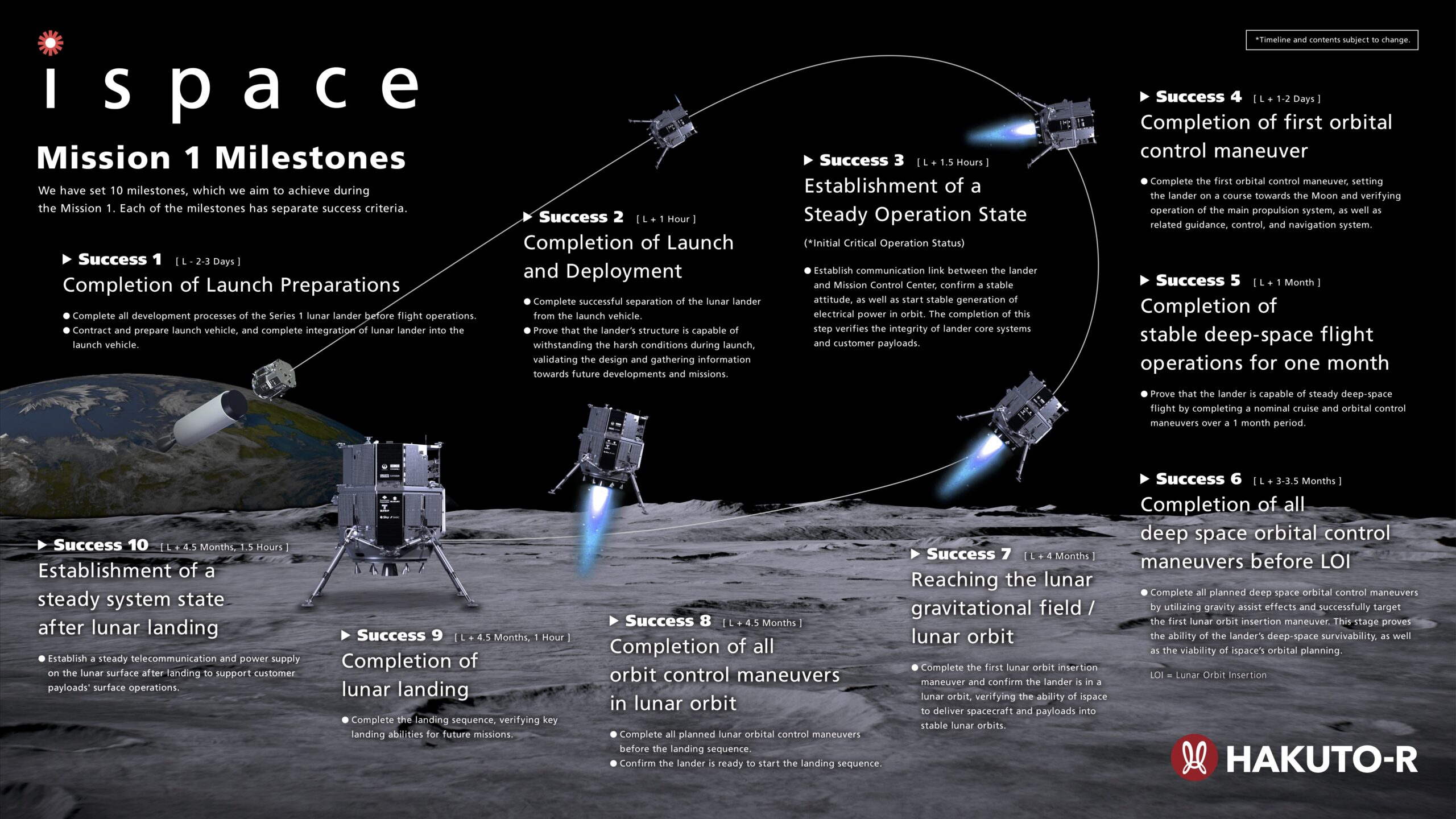 During the event, ispace released Mission Milestones for its inaugural mission at the press conference held outside of its Mission Control Center in Nihonbashi, Tokyo.

M1 is considered a technology demonstration with an overall objective to validate the lander’s design and technology, as well as ispace’s business model to provide reliable lunar transportation and data services. For M1, ispace has set 10 milestones between launch and landing, and aims to achieve the success criteria established for each of these milestones. Recognizing the possibility of an anomaly during the mission, the results will be weighed and evaluated against the criteria and incorporated into future missions, supporting the company’s evolution of sustainable technology and its business models.

The accumulated data and experience from M1 will be incorporated into future designs and operations to enhance missions, beginning immediately with Mission 2, which is already in the development stage and is scheduled for 2024. As a private corporation, ispace’s business model calls for continuous, short cycles of technology development to increase capability and reliability in order to usher in an era of full-scale commercialization of the space industry. This model will incorporate knowledge from both missions into Mission 3 (M3) planned for 2025. M3 will contribute to NASA’s Artemis Program under its Commercial Lunar Payload Services program with a mature lander design and operations based on data and experience acquired during the first two missions.

Mission 1 Landing Site Announcement
Along with the launch date and milestones, ispace announced its primary landing site, the Atlas Crater, located at 47.5°N, 44.4°E, on the southeastern outer edge of Mare Frigoris (“Sea of Cold”), chosen to maintain flexibility during operations. The primary landing site was chosen along with multiple contingencies, which may be used depending on variables that occur during transit. The site meets the technical specifications of the lander technology demonstration mission, the scientific exploration objectives for the MBRSC mission, as well as the mission requirements of our other customers. Careful consideration of the target site criteria included continuous sun-illumination duration and communication visibility from the Earth. Alternative landing targets include Lacus Somniorum, Sinus Iridium and Oceanus Procellarum, among others. Landing is currently expected to take place around the end of April 2023.

Final Mission 1 Payload Revealed
During the press conference, ispace announced its final payload, a music disc containing the song “SORATO” played by Japanese rock band Sakanaction. The song was originally written in 2018 in support of “Team HAKUTO,” a participant in the Google Lunar XPRIZE and precursor to ispace. Sorato was also the name of the lunar rover developed by Team HAKUTO during the Google Lunar XPRIZE, which closed without awarding prize money.

“We couldn’t make it happen back then, but I was surprised to hear just 4 years after releasing the song we had this opportunity,” said Ichiro Yamaguchi, guitarist, vocalist and founding member of the band. “I am looking forward to the launch. I know that there will moments where you will face difficulties due to various pressures and expectations, but we, including myself, will continue to support you. We hope that you will not be defeated and will face the challenge.”

Sakanaction was founded in 2005 and describes itself as a rock band with folksy melodies and a club music approach. They have released seven albums, regularly sell out arena tours and rank at the top of the charts in Japan.

An image of Sakanaction. Ichiro Yamaguchi (center) spoke via video message during the press conference.

The countdown clock’s time system, which can receive GPS satellite and keep accurate time, is connected to the time server of CITIZEN. It is also the same time system that is used in the MCC, which plays an important role in keeping time during the launch and mission.

Established in 2010, ispace operated “HAKUTO” which was one of five finalist teams in the Google Lunar XPRIZE race. The company’s first mission as part of its HAKUTO-R lunar exploration program is currently planned for as early as November 2022 and is expected to launch from the United States on a SpaceX Falcon 9 rocket. ispace has also launched a lunar data business concept to support new customers as a gateway to conduct business on the Moon.