TOKYO – May 2, 2022 – Today, ispace EUROPE S.A. (ispace EU), commemorated the fifth anniversary of the opening of its office in Luxembourg with a visit from His Royal Highness Prince Guillaume of Luxembourg, accompanied by the Minister of the Economy, Franz Fayot. His Royal Highness and the Minister toured the ispace EU office and new facilities and attended a ceremony to mark the anniversary.

ispace EU is the European subsidiary of ispace inc. (ispace), located in Luxembourg, Luxembourg. ispace EU opened in March 2017, under a cooperative agreement with the Government of Luxembourg’s SpaceResources.lu initiative to support the commercialization of space resource development. With this initiative, Luxembourg aims to become a European hub for space resource exploration and utilization.

ispace EU has grown significantly in its first five years, employing more than 25 staff members, including experts in space robotics, data analytics, and space resources utilization. The development of rovers is a core focus of the office, in particular the micro rover currently planned to be delivered as a payload to the lunar surface by ispace’s lander during ispace M2 mission. Early on, the office created a lunar yard and associated mission simulation facilities to support the development of its rover navigation technology.

On the occasion of today’s visit, two new facilities were inaugurated: a manufacturing lab for the production of lunar rovers, and a mission control room, which will complement the ispace’s Mission Control Center based in Tokyo, Japan, during its M1 mission operations.

During its five years of operation, ispace EU has achieved significant results including being selected together with ArianeGroup by ESA to participate in a pilot phase aiming to establish commercial partnerships in Europe for lunar transportation and exploration; the creation of a non-profit called EURO2MOON with Airbus Defense & Space, and Air Liquide to focus on topics related to the exploration of the lunar surface and the utilization of its resources in a commercial and sustainable way; and participation in European Space Agency’s Science Team for PROSPECT, a program which seeks to extract water on the Moon. 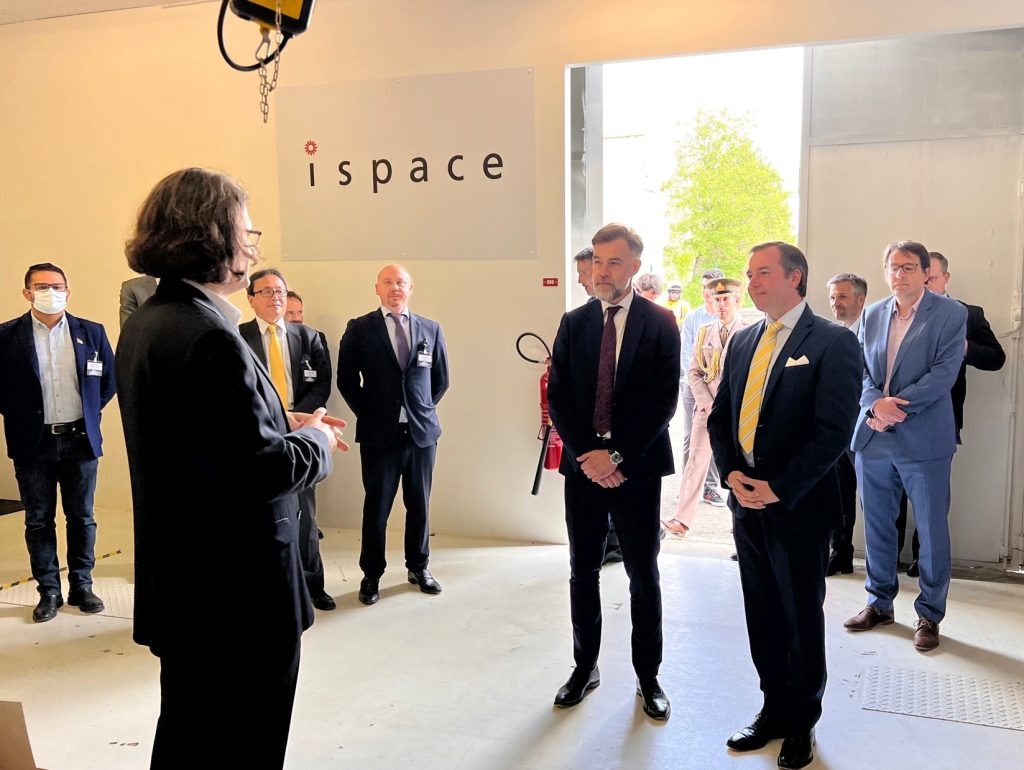 “Within 5 years, ispace EU has experienced a remarkable development which has contributed to strengthening the attractiveness and reputation of Luxembourg in the space sector. Supporting innovative companies in the space sector is essential to stimulate the success and commercial development of this sector. With the SpaceResources.lu initiative, followed by the launch of the LSA and ESRIC, the Ministry continues to be committed to stimulating research and collaborations in order to make Luxembourg a pole of excellence for space resources research in Europe,” said Franz Fayot, Luxembourg’s Minister of the Economy.

“When I encountered the idea of the space resource initiative, I was impressed by the foresight of the Luxembourg Government and was convinced that Luxembourg was the best place for us to begin our European operation. After five years, it has proven to be true. We are grateful for the support of the Government of Luxembourg and we look forward to further expanding our partnerships in Europe and beyond,” said Takeshi Hakamada, Founder and CEO of ispace, inc.

“I am very proud of the team we have assembled in the ispace EU office over the past five years. I think the ability and experience make us a leader in lunar rover technology and space resource utilization in Europe and globally,” said Julien-Alexandre Lamamy, Managing Director of ispace EU. “The space industry will see significant advances during the next 5 years and ispace EU will be leading the way with our partners and for our customers into the future.”

With its world-class talent, robotics capabilities, and connections to the Luxembourg ecosystem, ispace EU is uniquely positioned to accelerate the creation of a lunar industry in Europe and serve the needs of the growing institutional and commercial customers.

ispace is a lunar exploration company with over 170 staff and offices in Japan, Europe, and the United States. ispace builds small commercial lunar landers, aiming to provide a high-frequency, low-cost delivery service to the Moon. Aspiring to be a gateway for private sector companies to bring their businesses to the Moon, ispace has also launched a lunar data business concept to support companies with their entry into the lunar market. The company’s first lunar mission is currently planned for 2022*. The lander for that mission is currently undergoing final assembly at an ArianeGroup facility in Germany and will launch from the United States on a SpaceX Falcon 9 rocket.